Shining Stone Records Signs Multi-Blues Music Award Nominee Anthony Geraci and Will Release His New CD, Why Did You Have to Go, on September 21

“As a songwriter and arranger, I chose each musician for their individual talents that I knew would sound awesome on the songs they were singing and playing on,” Geraci says about the album sessions. “The recording process can always be a daunting experience. Being surrounded by musicians that are your friends is a very special feeling. I played music with many of these musicians for almost 40 years, others more recently. As the ‘producer,’ it was my job to get the material to everyone, coordinate the studio(s), and make sure everyone could make the dates – not an easy task especially with these many in-demand musicians! I wrote some of the songs while in Clarksdale, Mississippi – ‘Why Did You Have to Go’ and ‘Baptized in the River Yazoo.’ Most of the other songs were written at my home in Marshfield, Massachusetts, from notes I make while I’m on the road. If you keep your eyes and ears open you never know what ideas might happen. I try and tell a story with each song…a short narrative that people can relate to.”

The all-original 13 songs on Why Did You Have to Go cover a wide range of Geraci’s styles and influences, touching on several types of blues, R&B and even an excursion into jazz on the album’s closer, “A Minor, Affair,” which sounds like a combination of the textures explored by the Butterfield Blues Band on the groundbreaking “East-West” and something from Blue Note Records.

“‘A Minor, Affair’ showcases my love for classic jazz recordings,” Geraci states. “I always like to have a little fun with song titles (Remember ‘Fifty Shades of Blues’?) This song is written in – you guessed it – A minor – and the ‘Affair” could be construed either dealing with my music, such as having an affair with jazz while being known as a blues artist; or taken in the literal context within today’s society. Willie J. Campbell (bass) told me ‘it was the scariest song I’ve ever recorded!’ I like pulling great musicians out of their comfort zone and have them live on the edge while creating meaningful music.”

For almost 40-years pianist, Hammond organist and composer Anthony Geraci has played behind some of the most influential blues musicians of the 20th century. He is an original member of Sugar Ray and the Bluetones and Ronnie Earl and the Broadcasters. He has been recognized for his contributions on numerous albums by nominations from both the Blues Foundation/Blues Music Awards in Memphis, TN and the Grammy Awards. Anthony has been nominated the last three years for the prestigious Pinetop Perkins Piano Award (2016/2017/2018) by the Blues Foundation.

Additionally, he’s received BMA nominations for Album, Traditional Album and Song of the Year for the title track of his previous CD, Fifty Shades of Blues (2016.) At last count, he was a part of 40 BMAs nominations as a member of the acclaimed Sugar Ray and the Bluetones, including Album/Traditional Album of the Year nominations for Living Tear To Tear, the CD for which he wrote the title track. This year, he’s already received nominations from both Living Blues: Outstanding Musician-Keyboard; and Downbeat Magazine Readers Poll: Blues Artist or Group.

“Wherever my music takes me globally I’m inspired by the people, the history, the food, the smell and the sounds of the surroundings,” he says. “It is all reflected in my songwriting.

“My biggest joy is being accepted by people that I respect musically. I’ve had the privilege to record with Big Walter Horton, Big Jack Johnson, Odetta, Snooky Pryor, and more modern artists such as Duke Robillard, Ronnie Earl, Debbie Davies, Sugaray Rayford, Sugar Ray and the Bluetones, The Proven Ones, Welch/Ledbetter. I have a Masters Degree in music, but the real experiences playing with these and many more musicians worldwide have earned me a PhD in Bluesology!” 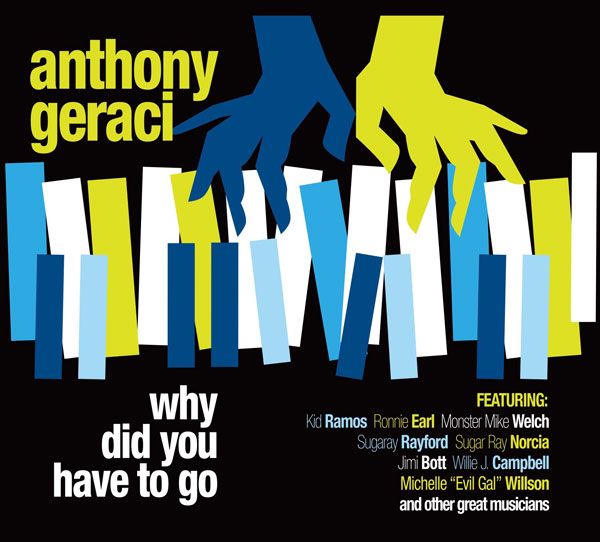